11 Oct What Goes Into A Bottle Cap Fish

Posted at 01:54h in Mosaic by johntunger

I took these pics a few weeks ago as I was getting ready to make the four new bottle cap fish for Vale Craft Gallery. This is what it looks like when I’m sorting beer caps for my mosaics. 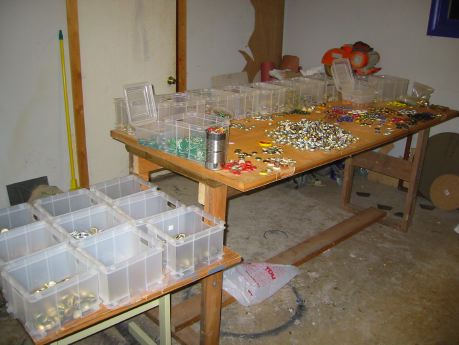 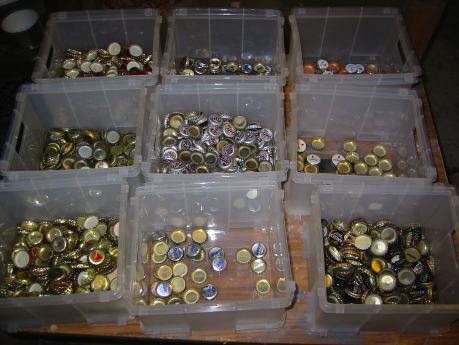 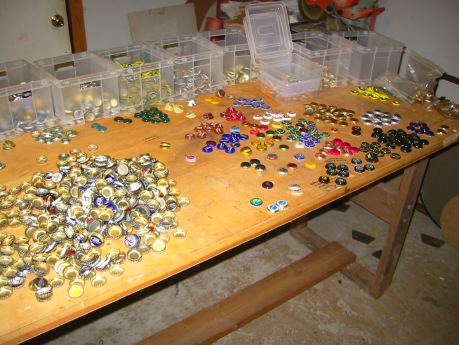 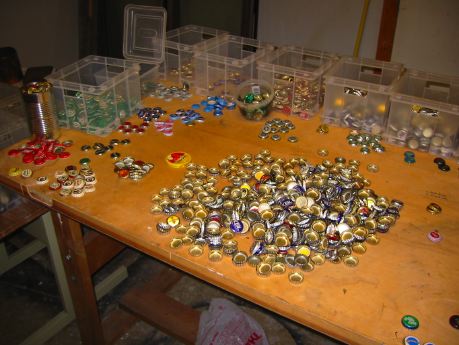 Actually, this is a lot better than the way it used to be. I recently went out and got these cool translucent tubs at the local dollar store and that makes the whole process much easier. I can now actually see what I have, and I can stack the containers. In the past, I was keeping the caps in coffee cans. Though it may have given me more points for reuse than new plastic stuff, the coffee cans sucked, especially because I could never tell what color or brand was in them.

Anyway, it takes about an entire day to get through sorting about two paper grocery bags full of caps. It’s a lot of extra effort, but I think it’s worth it. The one thing that most distinguishes my bottle cap pieces from those of other artists is the fact that I use that caps as solid colors or color blends, rather than just nailing them on in a random fashion. I also lap the caps, smashing only half to three quarters of the cap in order to preserve them as a textural element. It’s easier to smash the whole thing flat, but then uncolored edges of the cap kind of diminish the color. I’ve mostly been sticking to fish, mermaids and other things that have scales in order to make the texture really make sense. One of these days I’ll do an 8 foot long Chinese dragon in reflective blue and silver… That’ll be something to see. I’m just waiting till I find the right source art.

The other thing that makes a big difference when you’re doing work with beer caps is what kind of nail you use. On many of the cap mosaics I use standard gold linoleum nails from the hardware store. But I also order bronze, copper and stainless steel nails from a shipwright’s catalog… I find that coordinating the color and style of the nail head with the design on the cap adds a great deal of richness to the overall work.

If you’re in the Chicago Area and would like to see some of the bottlecap pieces in person, check them out at Vale. While you’re there, be sure to see Mark Brown’s sculptures also— They’re freakin’ amazing.