Posted at 18:53h in mosaic in glass, mosaic panels by johntunger 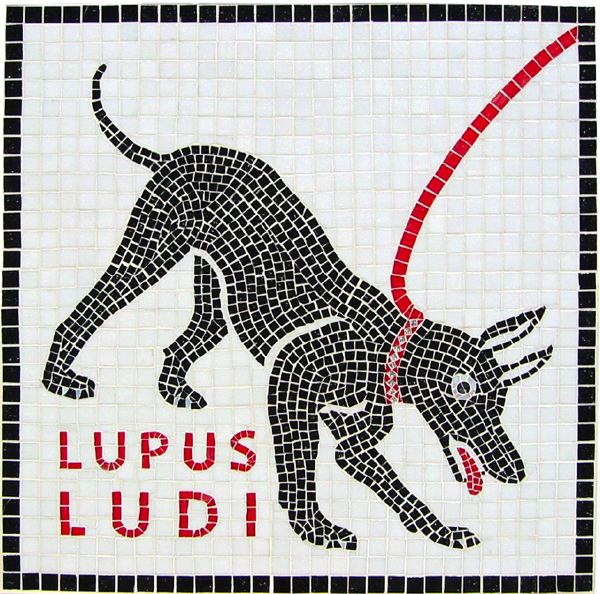 When I first saw an image of this “beware of dog” mosaic from Ancient Rome, I immediately fell in love with it. What appeals to me most is the disconnect between the warning aspect of the mosaic and the playful, happy appearance of the dog. So, last week, while Mya was working on her brown trout mosaic, I decided to recreate a version of the Cave Canem mosaic. I would have liked to use marble, but I think glass actually works better in this case, making the piece bolder and brighter.

The Roman mosaic I based it on is here. Although I worked directly from a printout of the image, there are a few things I changed. The most important change was to improve the andamento, the way rows of tesserae flow to emphasize the overall form. In the original mosaic, there were a couple areas where the tile was just filled in with no regard to the actual musculature of a dog. If you compare the flow of tile where the dog’s right shoulder and rear leg meet the body, I think you’ll agree that they look a little better than the original mosaic.

I had originally intended to inscribe the piece with the Latin for beware of dog, cave canem. But as I was working on the piece, I became more and more uncomfortable with that idea… for one thing, the dog isn’t scary looking, which is what I like about him. He’s playful. More importantly, I kind of feel like the world is far too full of warnings and dire threats these days and I just don’t want to contribute to the culture of fear even on a minor level.

This is where it came in really handy to have a visiting Latin scholar. Mya is a classics geek of the first order, which is funny, really, since I on the other hand pretty much consider the dawn of time to be circa 1900. Anyway, she grabbed her Latin dictionary and we tried for a while to come up with something that would be more on the order of “good dog” or “happy puppy.” Of course, going through a Latin dictionary, it becomes quickly apparent that almost all the words relate to politics, war and death. I’d forgotten what a totally militaristic world view they had, and have to admit to some surprise on finding that culture reflected so strongly in the vocabulary they had to work with. This is the kind of thing that makes being an artist so much fun really— you start out with a simple idea like recreating an ancient door mat, and by the time you’re half-way through you’re doing amateur cultural analysis based on how the words available to a culture influence what and how they can think. Heh.

So we were a bit confounded at first. We came up with a couple possible captions, but I was making it more difficult by insisting that the new phrase should be as sweet, short, alliterative and assonant as the original. The best we could do with the dictionary was candidus catellus, which, with a stretch of the imagination can be translated as “shiny, happy puppy.” Candidus is the root of our word candidate of course, and is normally translated to mean “white” (go figure). However, it can also mean shiny or happy. I figured it would be too confusing though on the whole, and besides, the letters would not have fit as well, nor did it have the proper assonance. So we put it hold for a bit and went back to cutting tile. Then Mya said something about a piece we’d heard on NPR where they were interviewing people about their relationship to the US government. One guy had said something to the effect that he really didn’t care one way or the other about the war, the economy or stem cells, but he really wished that they would let him shoot the endangered wolves that were eating his cattle. And suddenly, bang, I had it. Lupus Ludi: playful wolf. Really, what I mean is “happy dog” or “playful dog,” but I figure it’s close enough. And it has all the linguistic aspects I wanted: short, sweet, easy to guess, alliteration and assonance.

I guess this is what happens when you lock a former poet and a classics geek in a room with a bunch of tile.