Posted at 05:06h in Newspaper by johntunger 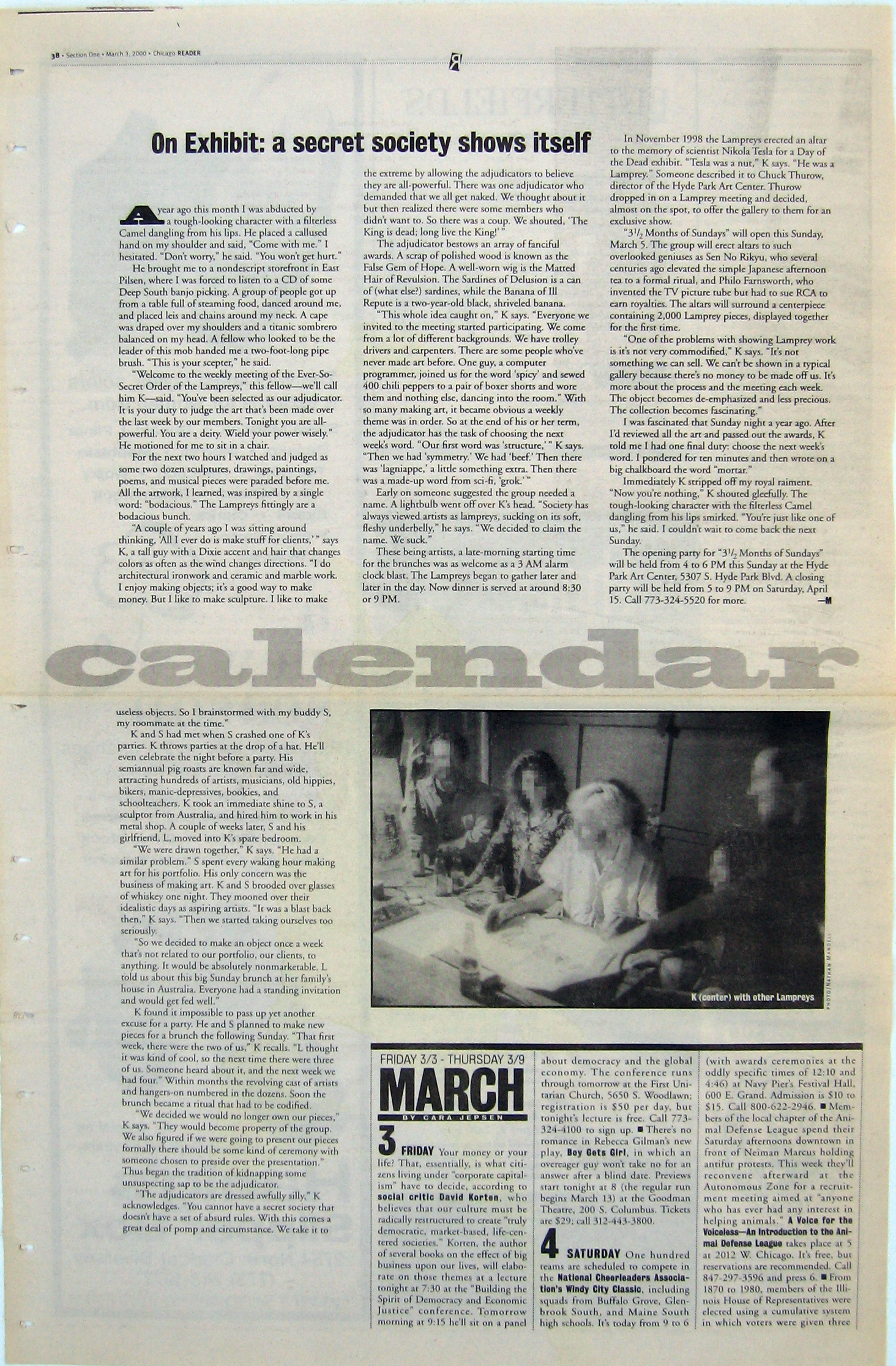 On Exhibit: A Secret Society Shows Itself

A year ago this month I was abducted by a tough-looking character with a filterless Camel dangling from his lips. He placed a calloused hand on my shoulder and said, “come with me.” I hesitated. “Don’t worry,” he said. “You won’t get hurt.”

He brought me to a nondescript storefront in East Pilsen where I was forced to listen to a CD of some Deep South banjo picking. A group of people got up from a table full of steaming food and placed leis and chains around my neck. A cape was draped over my shoulders and a titanic sombrero balanced on my head. A fellow who looked to be the leader of this mob handed me a two-foot-long pipe brush. “This is your scepter,” he said.

“Welcome to the weekly meeting of the Ever-So-Secret Order of the Lampreys,” this fellow—we’ll call him K— said. “You’ve been selected as our adjudicator. It is your duty to judge the art that’s been made over the last week by our members. Tonight you are all-powerful. You are a deity. Wield your power wisely.” He motioned for me to sit in a chair.

For the next two hours I watched and judged as some two dozen sculptures, drawings, paintings, poems, and musical pieces were paraded before me. All the artwork, I learned, was inspired by a single word: “Bodacious.” The Lampreys fittingly are a bodacious bunch.

“A couple of years ago I was sitting around thinking, ‘all I ever do is make stuff for clients,’” says K, a tall guy with a Dixie accent and hair that changes colors as often as the wind changes directions. “I do architectural ironwork and ceramic and marble work. I enjoy making objects; it’s a good way to make money. But I like to make sculpture. I like to make useless objects. So I brainstormed with my buddy S, my roommate at the time.

K and S had met when S crashed one of K’s parties. K throws parties at the drop of a hat. He’ll even celebrate the night before a party. His semiannual pig roasts are known far and wide, attracting hundreds of artists, musicians, old hippies, bikers, manic-depressives, bookies, and schoolteachers. K took and immediate liking to S, a sculptor from Australia, and hired him to work in his metal shop. A couple of weeks later, S and his girlfriend, L, moved into K’s spare bedroom.

“We were drawn together,” K says. “He had a similar problem.” S spent every waking hour making art for his portfolio. His only concern was the business of making art. K and S brooded over glasses of whiskey one night. They mooned over their idealistic days as aspiring artists. “It was a blast back then,” K says. “Then we started taking ourselves too seriously.”

“So we decided to make an object once a week that’s not related to our portfolio, our clients, to anything. It would be absolutely nonmarketable. L told us about this big Sunday brunch at her family’s house in Australia. Everyone had a standing invitation and would get fed well.

K found it impossible to pass up yet another excuse for a party. He and S planned to make new pieces for a brunch the following Sunday. “That first week, there were the two of us,” K recalls. “L thought it was kind of cool, so the next time there were three of us. Someone heard about it, and the next week we had four.” Within months the revolving cast of artists and hangers-on numbered in the dozens. Soon the brunch became a ritual that had to be codified.

“We decided we would no longer own our pieces,” K says. “They would become the property of the group. We also figured if we were going to present our pieces formally there should be some kind of ceremony with someone chosen to preside over the presentation.” Thus began the tradition of kidnapping some unsuspecting sap to be the adjudicator.

“The adjudicators are dressed awfully silly,” K acknowledges. “You cannot have a secret society that doesn’t have a set of absurd rules. With this comes a great deal of pomp and circumstance. We take it to the extreme by allowing the adjudicators to believe they are all-powerful. There was one adjudicator who demanded that we all get naked. We thought about it but then realized there were some members who didn’t want to. So there was a coup. We shouted, “The king is dead; long live the king!”

The adjudicator bestows an array of fanciful awards. A scrap of polished wood is know as the False Gem of Hope. A well-worn wig is the Matted Hair of Revulsion. The Sardines of Delusion is a can of (what else?) sardines, while the Banana of Ill Repute is a two-year-old black, shriveled banana.

“This whole idea caught on,” K says. “Everyone we invited to the meeting started participating. We come from a lot of different backgrounds. We have trolley drivers and carpenters. there are some people who’ve never made art before. One guy, a computer programmer, joined us for the word ‘spicy’ and sewed 400 chili peppers to a pair of boxer shorts and wore them and nothing else, dancing into the room.” With so many making art, it became obvious a weekly theme was in order. So at the end of his or her term, the adjudicator has the task of choosing the next week’s word. “Our first word was ‘structure,’” K says. “Then we had ‘symmetry.’ We had ‘beef.’ then there was ‘lagniappe,’ a little something extra. then there was a made-up word from sci-fi, ‘grok.’”

Early on someone suggested the group needed a name. A Light bulb went off over K’s head. “Society has always viewed artists as lampreys, sucking on its soft, fleshy underbelly,” he says. “We decided to claim the name. We suck.”

These being artists, a late-morning starting time for the brunches was as welcome as a 3 AM alarm clock blast. The Lampreys began to gather later and later in the day. Now dinner is served at around 8:30 or 9 PM.

In November 1998 the Lampreys erected an altar to the memory of Nikola Tesla for a Day of the Dead exhibit. “Tesla was a nut,” K says. “He was a Lamprey.” Someone described it to Chuck Thurow, director of the Hyde Park Arts Center. Thurow dropped in on a Lamprey meeting and decided, almost on the spot, to offer the gallery to them for an exclusive show.

“Three and a Half Months of Sundays” will open this Sunday, March 5. The group will erect altars to such overlooked geniuses as Sen No Rikyu, who several centuries ago elevated the simple Japanese afternoon tea to a formal ritual, and Philo Farnsworth, who invented the TV picture tube but had to sue RCA to earn royalties. The altars will surround a centerpiece containing 2,000 Lamprey pieces, displayed together for the first time.

“One of the problems with showing Lamprey work is that it’s not very commodified,” K says. “It’s not something we can sell. We can’t be shown in a typical gallery because there’s no money to be made off us. It’s more about the process and the meeting each week. The object becomes de-emphasized and less precious. the collection becomes fascinating.”

I was fascinated that Sunday night a year ago. After I’d reviewed all the art and passed out the awards, K told me I had one final duty: choose the next week’s word. I pondered for ten minutes and then wrote on a big chalkboard the word “mortar.”

Immediately K stripped off my royal raiment. “Now you’re nothing,” K shouted gleefully. the tough-looking character with the filterless Camel dangling from his lips smirked. “You’re just like one of us,” he said. I couldn’t wait to come back the next Sunday.