I mentioned previously that I stayed with John and Jimmy Whipple while I was at SXSW. It was one of those cool, organic things that happen in the blog world… Jimmie bought the very first piece of art I sold on the blog, we stayed in touch, and when I wound up in Texas, they were quite hospitable. I sent them a Blaze O Glory Brazier as a thank you gift. I figured it would be the perfect thing (short of the Great Bowl O Fire which was just too expensive to ship) for their annual music fest on the back 40, the Woodzie. 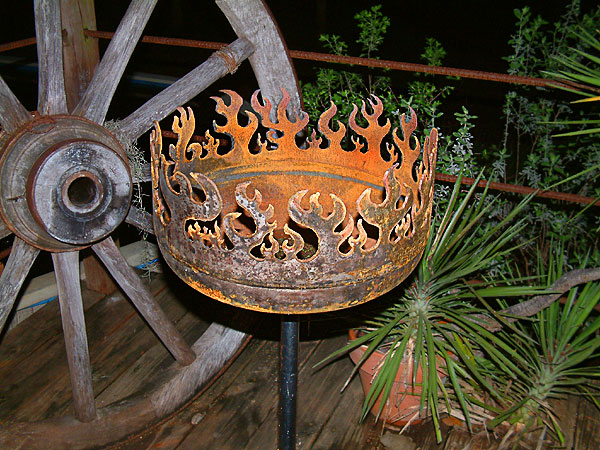 John sent me this picture of the brazier on their porch with the following quote:

The Woodzie has been postponed because of a freak cold front but it’ll be center stage all during the event. Then it will live right out our viewing window next to our wagon wheel, it looks AWESOME right there. Perfect for fires right there when we’re on the deck and there was no way for us to do that before. If it was your intention to completely surprise and please us, you succeeded 100%. Thanks very, very much. It’s now one of our most prized possessions.

I also liked this bit of an email he sent with more pictures:

Needless to say, it works great. If you ever want to make a printed brochure I can send you the full res files or describe a
shot and I’ll take it for you. I LOVE to photo this thing. After having red hot raging fires in it for hours and hours at a time, the surface
has gained a more complex, pitted texture – like it’s been forged. And it gets new, cool rust streaks now with every rain. It’s like a chameleon.

When I talked to John after the Woodzie, he made a couple really cool observations about how the Blaze O Glory had worked out at the music fest. The first thing he mentioned was that he really liked the adjustable height of the new stand design… I’ve been shipping the braziers with two 12″ sections of pipe and a coupling so that the brazier can fit in a smaller box to save on shipping costs. John liked it because he found that you can use both sections if you’re standing or sitting in chairs, or use just one if you’re sitting on the ground. I hadn’t really planned it that way, but it was kind of nice to know that the versatility was useful. 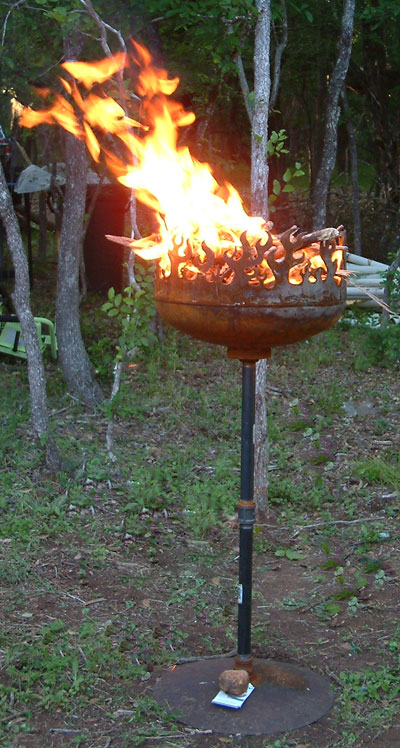 The other comment he made was even better— Although I originally figured that the braziers would be most useful for charcoal fires, at the the Woodzie, they had a nice little blaze going with sticks picked up off the ground. John told me that this made the brazier all the more popular at the event because people enjoyed gathering up the wood to feed the flame. 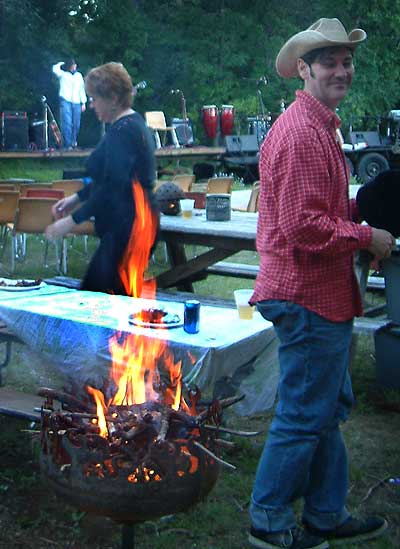 The part I liked best was when he told me that he had noticed that the fire seemed to last just the right length of time for a good conversation… so a couple people would gather up wood and feed it into the fire as they talked, and then, just as they wandered off to the next thing, someone else would take their place. Talking over an outdoor fire has been a tradition since just about as long as we’ve had fire and words… But I loved the thought that the brazier was not only a magnet for conversations, but also seemed to burn just the right duration for someone to tell a good story or talk about an idea. That’s pretty cool! 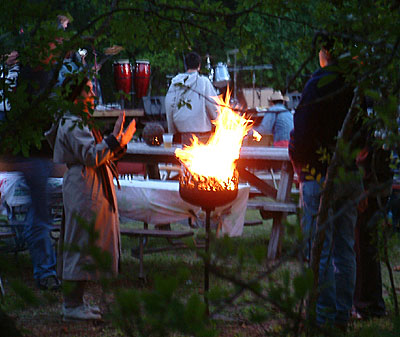