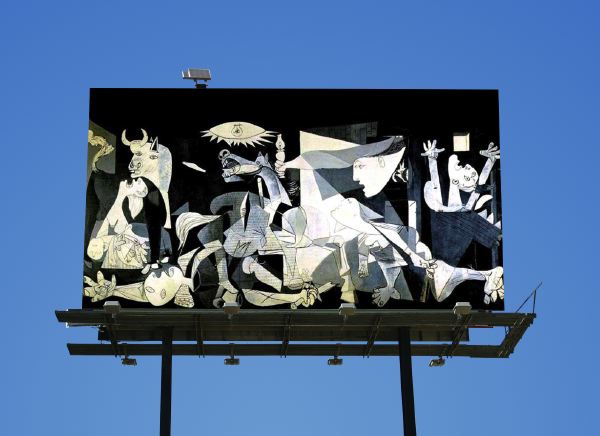 Doree Shafrir’s kick-ass article on the American Guernica Project went out on the Columbia News Service wire recently. It was picked up by a small handful of papers nationally. These are the ones I’ve found so far…

It’s sort of interesting to see how the story runs… The Sentinel cut the parts about Eric S. Raymond and open source, and wrote their own headline. The News and the Republic carried the full text with the original headline.

The timing was good, anyway. I was just in the middle of updating my CV so I could send in an RFQ for the CTA Arts in Transit Program. Amazingly, with all the cash and effort that has gone into developing a great public art program, there does not seem to be a website documenting Arts in Transit. There’s a somewhat half-hearted collection of off-site documentation here at chicago-l.org. (I say half-hearted because of a prominent disclaimer which reads “Note: This section has been established on an experimental basis and will be reevaluated after six months. All information in this section will remain on the site, however, even if it is disbanded.”) The City of Chicago website has some info on the overall public art program for Chicago, but I’m not going to link to it because they change their URLs all the time. I’ve never been able to bookmark a page on the city’s site and expect to be able to load it later… just do a google search and hope, I guess.

If you are looking for a good resource documenting Chicago public art, I can recommend Chicago Public Art Group. Not only do they have a great deal of photos, there’s a wealth of really good advice and info on public art in general.